Most miscarriages are diagnosed once a woman reports to her doctor with vaginal bleeding and cramping lower abdominal pain. These symptoms are caused by the separation of the degenerating placental tissue from the uterine wall and the contractions of the uterus to expel the products of conception through the cervix. The alternative presentation is the finding of a nonviable pregnancy on ultrasound, which had been performed to check the gestation, or when there are reasons for concern, for example the loss of pregnancy symptoms or the uterus being smaller than expected for the calculated time of gestation.

With the frequent occurrence of miscarriage, theories on potential causes abound and a large number of studies have been performed searching for a cause, but it would be naive to believe there to be one or only a few.  Aetiology of RPL includes:

Genetic factors for example, structural or numerical chromosomal abnormalities such as chromosomal translocations.  Found in 3-5% of couples with RPL compared with 0.7% of general population.

Immunological disorders an abnormal maternal immunological adaptation to pregnancy has been proposed as a cause of miscarriage for over 50 years. This is a controversial area especially regarding the natural killer cells test which has yet to be fully understood or to consistently and reliably diagnose such a problem. The Antiphospholipid syndrome is the only proven autoimmune disease associated with RPL.

Thrombophilias There is a large and contradictory literature on the association between inherited thrombophilias (genetic tendency to form blood clots) and RPL. However, there is evidence to suggest such conditions such as factor V Leiden and other blood clotting conditions could play a part.

Lifestyle factors Miscarriage is more common in women who are significantly under or overweight, women who smoke or drink large amounts of alcohol or caffeine.    Advancing maternal and paternal age is also associated with increased rates of miscarriage.  Various environmental factors have been implicated over the years, e.g. VDU screens, anaesthetic agents in theatre nurses, general pollution, air travel, saunas and Jacuzzis, sex, stress – none with proven scientific bases.

Unexplained in at least 50% of couples, no explanation or reason will be found for their recurrent pregnancy losses

Unproven tests for RPL, but used by some practitioners:

Living a healthy lifestyle before you get pregnant improves your chances of having a successful pregnancy and a healthy baby.  Preconception health care can be undertaken for the 3-4 months prior to conception. This can include the following: 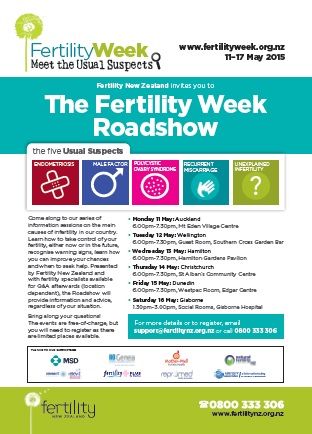 A series of free events on understanding fertility and potential fertility issues for now and the future, through both natural conception and Assisted Reproductive Technology. In six locations nation…