When my wife and I met some years ago, our only non-negotiable in a forever partner was to want children. Both coming from small families (and being the only children of our combined parents who could and would give them grandchildren), all we ever wanted was hundreds of kids… or just a few…

As a couple of wives, we self-identified our first barrier… sperm. We went to a fertility clinic in 2018 to get an idea of how this process might look for us, made some decisions about the use of a clinic provided donor and started our side of the medical testing. No issues detected at this stage, and we were on the waiting list.

Fast forward 28 months, a marriage and a house purchase later, we went back in for our “you’re at the top of the waitlist medical check up”. It was all go, well, once we found a donor. Unfortunately, at this stage there were no donors to view. As you can imagine when you’ve been waiting for 28 months, are married with the white picket fence and have a small house deposit put aside to pay for this sh*t, any delay took its toll emotionally.

A couple of months later we were given profiles to view and we found the one. Like, not just someone we thought seemed all good... both of us agreed that we could be friends with this donor, it could have easily been one of us writing the answers we were reading from his profile. Next steps were some paper work and there was definitely babies at the end of the Intrauterine Insemination (IUI) tunnel. We, foolishly, decided to keep our journey secret and made sure we kept everyone (friends, family, and foe) a step behind where we were really at. We didn’t tell people we chose a donor until three months after we had. We thought this way, one day my wife would be 12 weeks pregnant, we would break the news and it would all be balloons and confetti…

Day one of my wife’s cycle came around, she called the fertility clinic, and she was in the system. Blood test day ten… how super incredibly easy, and the nurses were just so lovely.

HOW SUPER INCREDIBLY NOT EASY as the next day’s blood test and scan revealed that there was no follicle development and her hormones indicated that she would not ovulate. Cancelled cycle number one in the books. Our fertility doctor had been really great and encouraging with this whole process, which we owe our current emotional stability to. A quick phone consult with Dr Fertility herself and it was decided that Letrozole was going to be the best option given my wife’s known Polycystic Ovarian Syndrome (PCOS). The risk of ovarian hyper-stimulation (also causing a cancellation of the cycle) is higher in PCOS so this drug was the safest option for us. After this cycle-not-cycle, I managed to lie my way through a family dinner interrogation about our baby making journey.

Attempted round two – Day one and my wife calls in. Our plan is in place with the golden drug. Day three I believe she started her dosing, that day she also had severe nausea, vomiting, diarrhoea, abdominal cramping and extreme lethargy. In turn, this brought on dehydration and muscle cramps. Needless to say she wasn’t making it to the city for her blood test and scan on day ten. Oh, did I mention that we live an hour or more out of Wellington city, and earlier blood tests proved that if results were needed before midday, which was more often than not, we/my wife the trooper needed to make this drive?

Anyway, apparently all these side effects were worth it because this cycle had follicles, had ovulation, and finally had the first treatment. Two weeks later this cycle also had a period, and an HCG (pregnancy hormone) that was inconclusive initially, confirmed to be a negative result a few days later. At least now we had worked out what medications were going to work best and that sure wasn’t our good friend, Letty (letrozole).

Celly, the cells which will become our hypothetical baby, was given another chance to grace us with her presence at the next day one. We/Dr Fertility had decided on Clomiphene as the drug du jour and dosing began day three again. This round and the next looked much the same; follicles, ovulation (I think there was a trigger injection in there too this time. Credit to my wife who took on the stress of making sure it was shot up at exactly 11pm while working the night shift in the back of a busy ambulance) and treatment. Again; period, inconclusive blood test and then a further negative pregnancy test. At this stage, some 25 blood tests, 5 scans, three inseminations with celly’s boyfriend Semey, hours of driving and missed sleep, and around $10,000 later we decided a catch up with the doc was in order.

This meeting was actually really refreshing (aside from the fact that she was heavily pregnant at this stage to rub salt in the wound, but we won’t hold it against her). We discussed some further testing we could do to rule out causes of infertility, the worst case scenarios and the possibility of public funding. Due to the requirement of having to ‘try’ for a baby and failing in order to get public funding, same sex couples are heavily disadvantaged… so ‘trying’ to us looks like six rounds of self-funded IUI (or the discovery of a cause of infertility).

Rearing to go, on day one again… this time with the unveiling of a blocked fallopian tube under our belts. Except we knew because of said fallopian tube, we were now eligible for publicly funded In-vitro fertilization (IVF) in 9-12 months’ time when we got to the top of the next waiting list. The relief that in 9-12 months’ time we could access finances was… will… be a relief, in 9-12 months. We decided three more self-funded, clomiphene driven IUI attempts would bide some time so we could feel like we were giving this our best shot. Day one; the call. Day three; the drugs. Day ten; bloods and scan. Day eleven; cycle cancelled due to the medications not having any/the desired effect. So that’s where we are at currently. It’s worth the mention in all of this that my wife’s work have been incredibly understanding and supportive. Some shifts, she leaves twice for blood tests, scans and treatments and they’ve facilitated this every time without adding any undue stress… considering one of her managers (a male) had no idea that when she had appointments directly related to her menstrual cycle.

We’re patiently waiting for the beginning of our next IUI cycle to see if the drug that had previously given us hope could do so again. There is the option of self-funded IVF at this stage but no treatment is guaranteed to result in a positive pregnancy so we are quite hesitant to drop 8-15k on something that’s realistically only 20% more effective than IUI, and we will eventually get that sweet, sweet public funding. I guess we’re still feeling positive that my wife will carry a baby one day, ideally soon, we are just so tired from the whole process. There is not one single thing romantic about artificial insemination or being besties with your fertility nurses. Making this baby doesn’t involve a good aphrodisiac and some old school RnB, and to be honest it will be a relief to hear some positive news. We’ve toyed with the idea of swapping the uterus involved but I can imagine that only adds fatigue and emotional confusion so for now, we’re sticking with uterus A (also known as my wife’s womb). My wife has numerous times apologised for not being able to give us a baby, despite none of this being her fault and I could never rob someone I love of the chance to carry a child. One day I will begin this process, but we will be doing everything in our power (financially, physically, emotionally) for uterus A to house the first born.

“In the scheme of things, you’ve ONLY been trying for 7 months… that’s actually not too bad”

“Hah, you could just do it the old fashioned way”

I won’t get started on that word ‘choice’, a word overused by many a homophobe. There is nothing about this process that is normal, let alone sexy, nothing about it is easy, and the only thing about this failing journey that brings you together is fatigue, frustration and sadness. The ray of light for us both is that one day we will have children, we will be great mothers (although my wife is being left with the responsibility of the dad jokes because I don’t do funny) and that we have each other through this unpredictable time. Over my dead, lesbian body would we have initially done this the oLd fAsHiOnEd WaY and the ship of ‘simple conception without fertility problems’ has sailed for us so this is our reality. I don’t want to write a sob story because vicarious trauma isn’t something I’m into. I’m not trying to scare people off, that’s not what this is about. My wife and I just want people to know what infertility is like and how from the outside, it may seem like ONLY a few appointments, some medications and wham, bam, thank you ma’am (our inseminating nurses being the ma’ams), but it really impacts all aspects of life and it’s a topic that should be normalized. No person should feel at fault for not being able to bring a baby into this world, nor should they even feel like they need to have a child to prove their woman/man/adulthood. Our family and friends know now what has happened, are up to date with our journey and we have become very open with our story and it’s helped….

AND LET ME TELL YOU – the day that we do, finally, break the news of the baby hotel’s occupation, there will be so, so much confetti. I will be filling the joint with balloons… and I’m adding glitter, so get ready. 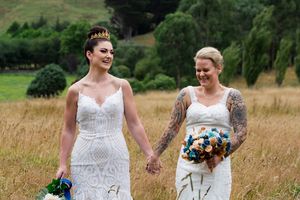 "There is nothing about this process that is normal, let alone sexy, nothing about it is easy, and the only thing about this failing journey that brings you together is fatigue, frustration and sadness. The ray of light for us both is that one day we will have children, we will be great mothers".

Whānau building in the Rainbow community with Christian Newman (parent via surrogacy, and Love from your Dads) & Stewart Dalley (Barrister & Solicitor).
Christian and Stewart will discuss what to be prepared for and anticipate on this journey to parenthood, legal framework overview and the main considerations for people at the consideration/planning stage.  To join the webinar click here.

For more information about Infertility in the LGBTQI+ community, click here.

The donation of sperm is a generous gift to people who may only achieve a pregnancy by using a donation. For more information on sperm donation, click here.