Did I ever think I would write about my own fertility journey? Absolutely not, why would I?  Having kids was meant to be easy, straight forward and fun.

When my wife and I started our journey, in my head I thought after a few months of trying to conceive she would be pregnant.  As it turns out I was so very wrong.

Several months went by and we decided to investigate and made a joint appointment with our family GP.  We both had to have blood tests, and I had to provide a sperm sample to be analysed.

My wife went on for further testing and was diagnosed with severe endometriosis and as a result she had to have an operation.  My results came back average and was instructed by our GP to make some lifestyle changes to help the mobility of the sperm and it was recommended that I lose weight, reduce my coffee intake, and wear loose fitting underwear.  I was prepared to try everything, even wearing loose boxer shorts, which I wasn’t a fan of, but I soldiered on!

My wife’s operation to remove the endometriosis mainly from her bowel was a success.  The specialist told us that if we weren’t pregnant after 6 months to seek fertility assistance.

That 6 months dragged on.  Every month was a disappointment, we had one negative test after another.  Sex became a chore; it was no longer fun and exciting.  Sometimes the pressure was such a strain (mentally) – I would fake ejaculation.

The time came and we decided to pay for a private appointment with a fertility specialist to investigate further why we were getting pregnant.  We had further testing done, including another sperm test.  At our appointment we discussed some treatment options to try before exploring IVF.  We left that appointment on a high, we felt like we were getting somewhere.

We knew we weren’t going to conceive the old fashion way, as we needed fertility assistance, this took the pressure of us as a couple, and we decided to invest more time and compassion into our relationship.  We planned weekends away and regular date nights, being intimate with each other was less mechanical and a lot more fun.

Then, two weeks later after our first fertility consult a letter arrived in the mail explaining my diagnosis of anti-sperm antibodies, which basically meant my swimmers were stick together and didn’t swim.  Our only option going forward was IVF.  That night was date night, we had booked to watch the latest Melissa McCarthy comedy and all I remember of that night was holding my wife as she cried throughout the whole movie.

I was annoyed at this point, I felt disappointed and let down by my GP with the casual misguided diagnosis from my first sperm test.  I was annoyed and questioned why we weren’t referred to a specialist 18 months ago.  This was the deciding factor for me, I had to change GP’s – that doctor was not the right fit for me, and I moved on.

My partner knew how to express her feelings, she had a good support system in place with close friends and I was her rock too.  It was important to me that my wife felt loved, supported and heard.  All I wanted to do was to fix everything, but I couldn’t – I felt helpless.  I tried talking to people about what I was going through, some people made ill-manned and disrespectful comments and others just didn’t understand or didn’t want to know.  That is when I shutdown.

Months went by and after jumping a few more hurdles, we were finally on the public funded waitlist for fertility treatment.  During this time, my wife learnt about Fertility NZ and signed us to a fertility Contact Group, I wanted to go to support my wife.  I don’t want to say I was dragged along kicking and screaming to this group, I thought she would get more out it than me, but I was pleasantly surprised.  I was in a safe environment with others going through something similar, I wasn’t alone, and I could talk about my journey without judgment.  This was a turning point for me.

A few months later we received a call to say that we were nearing the top of the list and treatment was about to start.  We went to the fertility clinic for orientation and we learnt about the drugs and how to do the injections, my wife was so nervous.  Her last injection was given in April and that night we went to Vector Arena to watch Ed Sheeran and throughout the whole concert, I held her in my arms.

Our first round of IVF was successful and resulted in us becoming parents to a gorgeous little boy.  Our journey is not over, and we have started the process to donate our remaining embryo, the next adventure awaits. 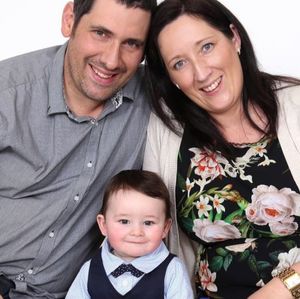 "Two weeks later after our first fertility consult a letter arrived in the mail explaining my diagnosis of anti-sperm antibodies, which basically meant my swimmers were stick together and didn’t swim.  Our only option going forward was IVF".

Jo's presentation will cover smoking, alcohol, drugs, obesity (just touching on nutrition) and the link between sperm and miscarriage. To join the webinar, click here.

Become a member and Join Fertility NZ, registration is FREE!