Our story and a broken heart

Married in 2016, Jess and Michael dreamed of starting a family. However, month after month brought heartache and tears as Aunt Flo arrived like clockwork. They were both young, fit and healthy. Jess saw her Doctor in June 2018 and qualified for a free appointment with a fertility clinic. A letter arrived informing them of their appointment in August 2018. In the meantime, there were a number of tests undertaken to see what the issue may be. At their Thursday appointment with their specialist it was revealed there were no obvious reasons as to why they couldn’t conceive and they were given a number of different options to consider.

The following Monday, their Fertility specialist rang to confirm which option they would go with. Jess and Michael chose to go with a privately funded round of IVF. Nerves grew as it was revealed they could begin their IVF cycle in nine days when Jess’s period was due. There was a flurry of paperwork, payments and other preparations undertaken as the glimmer of hope in starting a family began to grow.

Nine days later and Jess rang to confirm her period had arrived and they would begin their round of IVF. The injections began and Jess took three weeks leave from her job to focus on having the best outcome possible for their family. The daily injections, begin first with Gonal-F and then also Orgalutran. Scans, blood tests, phone calls and drives into the city dotted the next few days as Jess’s follicles grew. Finally, they were instructed to use the trigger injection and 36 hours later, and it was egg collection day. Fifteen eggs were taken, 12 made it through the night. Six grew to high quality five day blastocysts.  One was transferred into Jess’s womb and the remaining five were frozen for potential future use.

Nine days and one blood test later, they received the phone call they were waiting a lifetime for. They were pregnant! At their final appointment with the fertility clinic, they saw the flickering heartbeat of their much longer for IVF miracle. It was revealed that Jess and Michael had “unexplained” infertility as all their testing came back as normal.

After the birth of their first child, they decided to expand their family. Trying to conceive naturally returned the flood of emotions and negative results so it was back to the fertility clinic to have one of their frozen embryos transferred. They were pregnant again! However, as New Zealand moved Alert Levels in their COVID response, Jess and Michael’s elation at their expanding family would be cruelly halted. The first day of Alert Level 4 would be a day they would never forget as Jess miscarried their unborn child that day. A series of events including an ambulance, urgent trips to hospital, the after hours, multiple blood tests and a lumbar puncture were made even more difficult with staying in their bubble, away from much needed support during this difficult time.

After some consideration, Jess and Michael returned to the fertility clinic for another frozen embryo transfer. They were pregnant again and their rainbow baby was born mid 2021.

They never thought when they first got married that being able to create a family would be such a journey. They are young, healthy and even now still do not know why they cannot conceive naturally. Looking at them, you wouldn’t know the journey they have had to becoming parents. As they have learnt, infertility and miscarriage can happen to anyone, no matter the age and stage of their life.

When they began their journey, they didn’t know anyone else who had experienced difficulty with conceiving. They had a sense of loneliness and isolation as around them everyone else seem to conceive easily. Now they know they are not alone.

Remember, your story might be the courage someone else needs to reach out for help in achieving their fertility dreams. 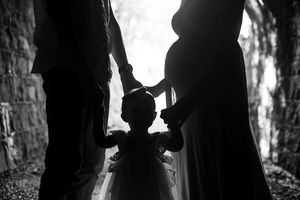 "When they began their journey, they didn’t know anyone else who had experienced difficulty with conceiving. They had a sense of loneliness and isolation around them as everyone else seem to conceive easily. Now they know they are not alone".

The waiting game each month is often peppered with spurts of optimism followed by pessimism.  It is an emotional roller coaster; with the rollercoaster hitting the high – only to be followed by a crash at the bottom when another period arrives or the treatment fails or the hoped for adoption doesn’t happen. Some fertility medications can also affect moods. To read more, click here.